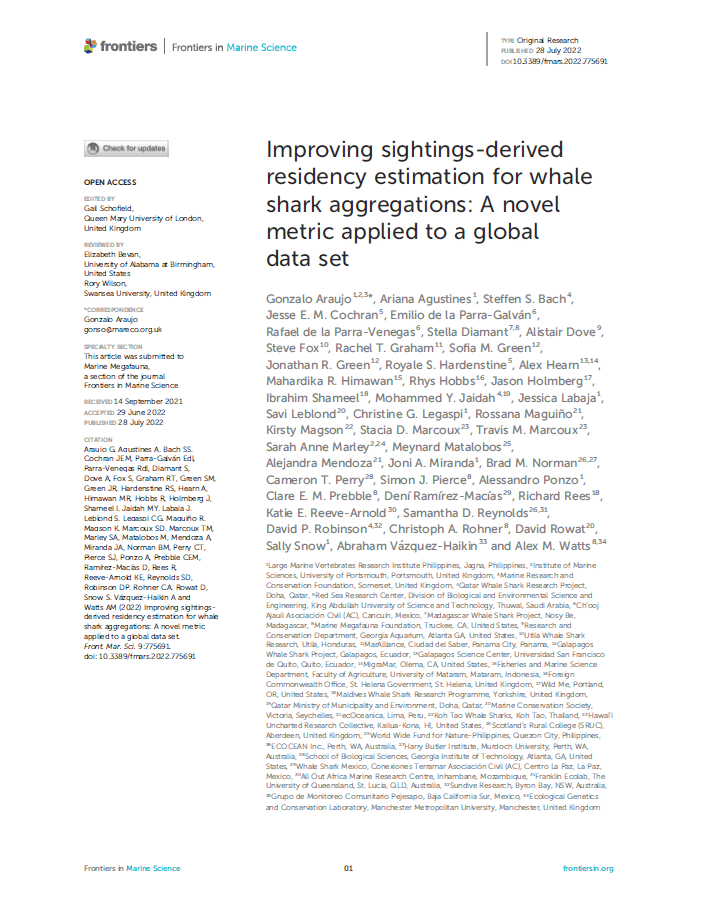 The world’s largest extant fish, the whale shark Rhincodon typus, is one of the most-studied species of sharks globally. The discovery of predictable aggregation sites where these animals gather seasonally or are sighted year-round – most of which are coastal and juvenile-dominated – has allowed for a rapid expansion of research on this species. The most common method for studying whale sharks at these sites is photographic identification (photo-ID). This technique allows for long-term individual-based data to be collected which can, in turn, be used to evaluate population structure, build population models, identify long-distance movements, and assess philopatry and other population dynamics. Lagged identification rate (LIR) models have fewer underlying assumptions than more traditional capture mark recapture approaches, making them more broadly applicable to marine taxa, especially far-ranging megafauna species like whale sharks.

However, the increased flexibility comes at a cost. Parameter estimations based on LIR can be difficult to interpret and may not be comparable between areas with different sampling regimes. Using a unique data-set from the Philippines with ~8 years of nearly continuous survey effort, we were able to derive a metric for converting LIR residency estimates into more intuitive days-per-year units. We applied this metric to 25 different sites allowing for the first quantitatively-meaningful comparison of sightings-derived residence among the world’s whale shark aggregations. We validated these results against the only three published acoustic residence metrics (falling within the ranges established by these earlier works in all cases). The results were then used to understand residency behaviours exhibited by the sharks at each site. The adjusted residency metric is an improvement to LIR-based population modelling, already one of the most widely used tools for describing whale shark aggregations. The standardised methods presented here can serve as a valuable tool for assessing residency patterns of whale sharks, which is crucial for tailored conservation action, and can cautiously be tested in other taxa. 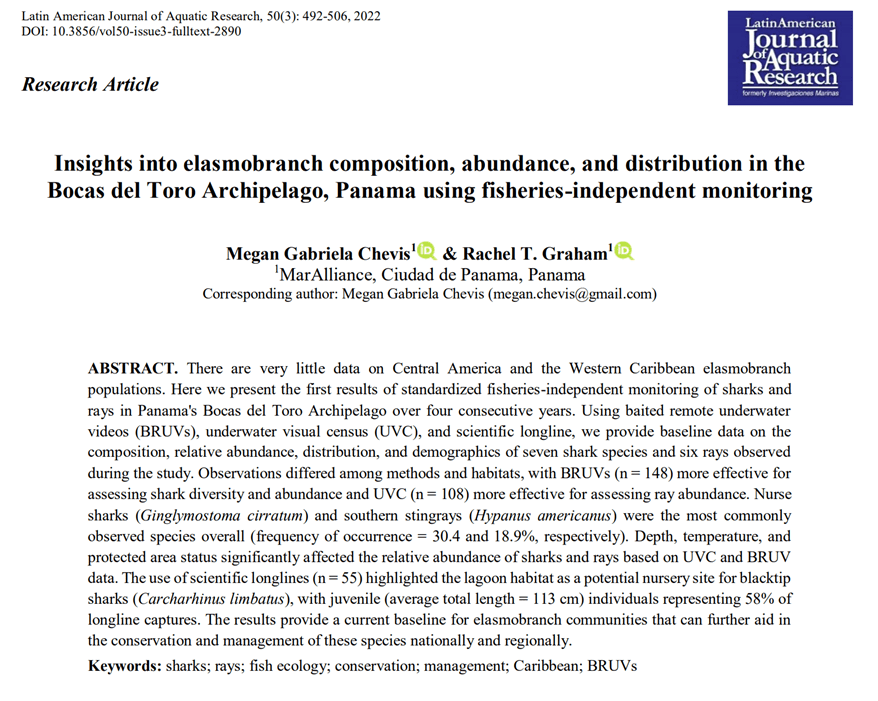 There are very little data on Central America and the Western Caribbean elasmobranch populations. Here we present the first results of standardized fisheries-independent monitoring of 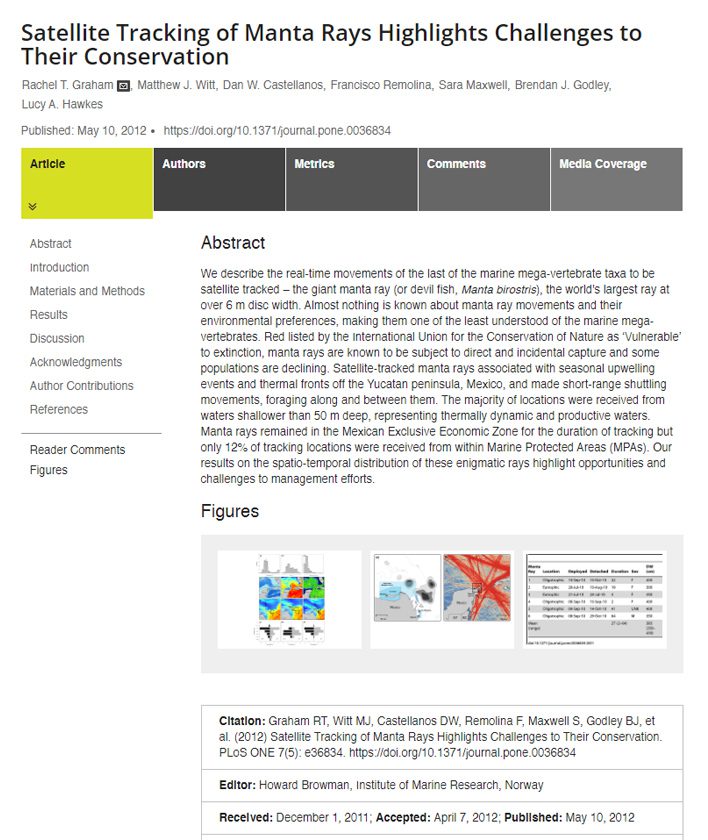 Satellite Tracking of Manta Rays Highlights Challenges to Their Conservation

We describe the real-time movements of the last of the marine mega-vertebrate taxa to be satellite tracked – the giant manta ray (or devil fish, 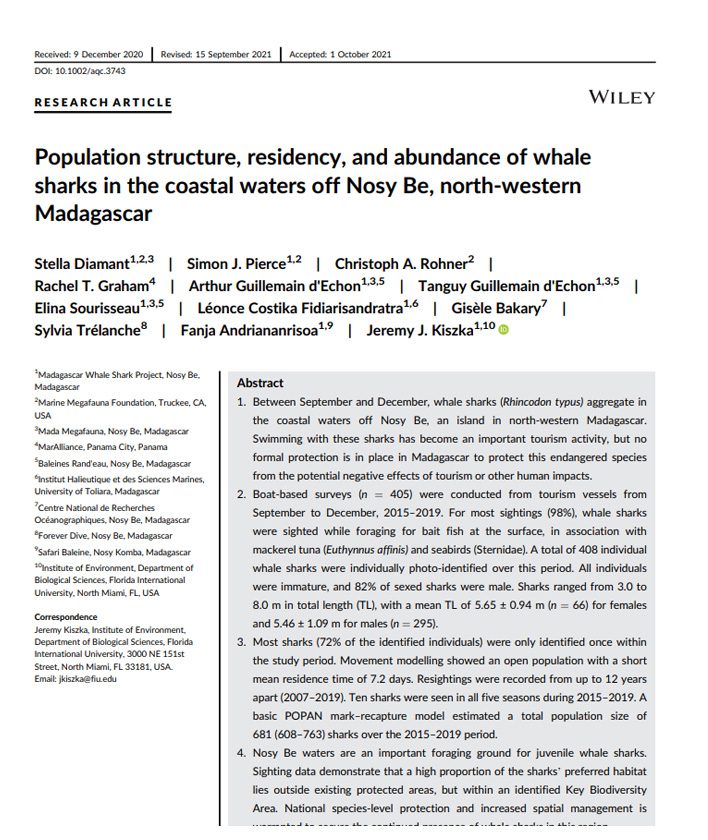 Population structure, residency, and abundance of whale sharks in the coastal waters off Nosy Be, north-western Madagascar

The whale shark (Rhincodon typus) is the world’s largest fish, growing to around 20 m in total length (Chen, Liu & Joung, 1997). The species